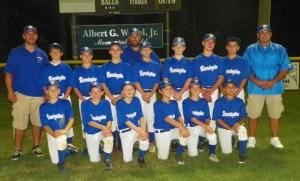 Erial had averaged almost 15 runs per game and had won each game by at least 10 runs during the Majors tournament. In Saturday night’s heat in Mount Ephraim, Barrington held the team to just 5 runs and kept the score close from beginning to end, but couldn’t get over the top for the win.

Barrington now moves to the elimination bracket, where it faces a rematch with Blackwood. Barrington topped Blackwood 14-4 on July 2 in Barrington. The teams will play at 6 p.m. tonight (Monday) in Haddon Heights with the winner advancing to face defending champion Erial at 7 p.m. Tuesday in Erial.

If Erial wins that game, they will win the tournament again. If Erial loses — which would be the team’s first loss in the double-elimination tournament — there would be a final game at 7 p.m. Wednesday in Erial to determine the champion.

Game results from this page

One comment on “Barrington Little League falls to unbeaten Erial; still has one more chance tonight”

This entry was posted on July 9, 2012 by Barrington Bulletin in Region, Sports and tagged blackwood, erial, little league.