“Two former teachers and the former principal of Triton Regional High School in Runnemede, implicated last fall in a sexual-abuse case, have pleaded guilty to official misconduct and failing to report the incidents to authorities. 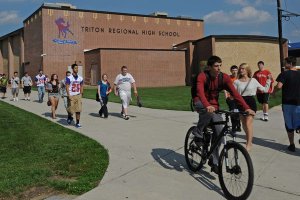 “As part of the plea agreements, the former school employees forfeited their right to hold any public jobs in the state, including as educators.

“The teachers, Jeff Logandro, 32, and Dan Michielli, 27, both of Blackwood, were accused in October of having improper personal and physical relationships with female students between November 2011 and June 2012.

“The former principal, Catherine DePaul, 55, of Woodbury, confirmed Monday that she had reason to believe that the students had been subject to child abuse and had failed to immediately report the information to law enforcement or the New Jersey Division of Children and Families when she learned of the allegations in April 2012. DePaul did alert authorities later on, she said.”

This entry was posted on February 12, 2013 by Barrington Bulletin in Crime, Region and tagged triton.