As of late March, 56 children had been signed up to start kindergarten at Avon School this fall.

The figure is a 20 percent drop from the number of expected first-grade students at Avon  (70) and almost one-third fewer than the expected number of second-graders (83). 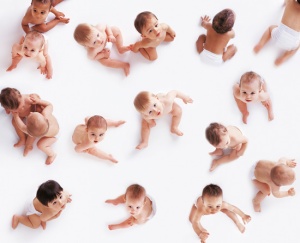 According to the number of students predicted by grade under the recently approved district budget, it appears Barrington underwent something of a Baby Boom from 2004 to 2007. The numbers — which reached their peak with the class entering second grade this fall — appear to have begun to drop again.

Children born during that span are entering first through fourth grade this fall. And because of the large number of children, four sections are required for each of those grades.

Most of the remaining grades, on the other hand (K, 6-8), have three sections, while fifth grade (many born in 2003) has only two sections with a total of 43 students.

Under the budget — and based on enrollment — the Avon and Woodland schools expect to have the following number of students and sections per grade:

The author of the Barrington Bulletin, Mark Correa, is also a member of the Barrington School District Board of Education as of Jan. 6, 2013. Please be aware that I do not speak for the board in any way. The thoughts, views and opinions contained within the posts on this site are mine and mine alone. And the comments after any given posts are the thoughts, views and opinions of the author of the comment.

If you have any concerns over my objectivity or with the content on this site, please leave a comment or email me.

This entry was posted on April 3, 2013 by Barrington Bulletin in Schools.