A number of residents of the Hidden Ponds housing development within the borough again brought their concerns before the council in a sometimes heated exchange during the regular monthly meeting Tuesday night at borough hall.

The neighborhood of 14 homes built around 2005 comprises Alyse Court, Ashley Court and Lauren Lane off Davis Road (see map).  Homeowners said they were stunned when they were told this year by the community’s developer that they would be responsible for upkeep and maintenance of the sewage pumping station that serves their neighborhood. 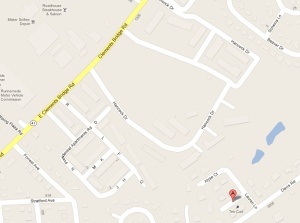 Realtor and Hidden Ponds resident Kathy McDonald explained that while they were told they needed to pay a $100-per-year homeowner’s association fee that would cover services ranging from lawn mowing to pump station maintenance, nobody believed that included responsibility for the equipment or the need to pay an engineer.

Council President Kirk Popiolek responded several times that this is a civil matter between the residents and the developer, echoing his comment from the previous meeting: “Why would the town be responsible if the developer had previously paid for it (pump station maintenance)?”

Popiolek also reminded residents that sewer fees for their community are paid to Runnemede due to a shared-services agreement, and that Barrington takes only an administrative fee as part of that agreement.

Mayor Robert Klaus said he would arrange for a meeting soon between council and the residents to discuss the matter in greater detail.

As noted in the previous story on this issue:
Any issue involving homes is an emotional one. If any resident would like to share his or her thoughts on this issue (including to correct any inaccuracies I might have in my post, above), please feel free to do so in the comment section below. I invite members of the Hidden Ponds HOA to write a more detailed explanation of their position, if they would like to, which I will post separately to give it more prominence on BarringtonBulletin.com.

This entry was posted on April 10, 2013 by Barrington Bulletin in Borough Hall, Business / Money and tagged hidden ponds, taxes.